It is situated in the Gulf of Mannar at the very tip of the Indian peninsula. According to legends, this is the place from where Lord Rama, built a bridge Ram Setu(also known as Adam's Bridge) across the sea to Lanka to rescue his consort Sita, from her abductor, Ravana. This is also the place where Rama worshipped Shiva to be absolved of the sin of killing Ravana, hence the name of Shiva, which became the name of the town - Rameswara ("lord of Rama"). Both the Vaishnavites and Shaivites visit this pilgrimage centre which is known as the Varanasi of the south.

The village is surrounded by paddy fields , coconut trees and sea is within 5 kms from it.(photo : hindu.com ) 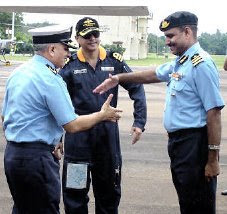 In the aftermath of the Mumbai terror attacks which exposed the vulnerability of India's coastline, the Indian Navy has commissioned a naval air station at Uchipuli in Tamil Nadu, to monitor the waters in southern India, the Indian Navy announced.The Uchipili station have three Dornier aircraft and Chetak helicopters for the surveillance.

An Unmanned Aerial Vehicle squadron will soon be based at INS Parundu permanently, under the control of the Eastern Naval command. Source: Google

Here comes a yummy recipe from this village,leant this from my hubby aunty who stays in Uchipuli . 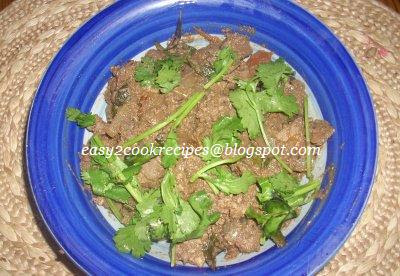 2) Then add finely chopped tomato,fry them till tomato is fully mixed with onion to form thick gravy.

3) Add turmeric power,chicken masala and salt and mix them well.Wait till the raw smell of powers leave.

4) Then add well washed,cleaned and chopped liver to the gravy.Mix them well with the gravy.

5) Add little water to the mixture not more than half a cup.Cover the mixture with a lid.

7) Add chopped coriander leaves before removing from the flame.

8)Turn off the flame. Serve hot with rotis,Idli's or dosa's.Sending this to Grammathu Kaimanam hosted by me .

Gita Jaishankar said…
THe gravy looks delicious Shama, I love liver fry, I have to try out this authentic dish soon, thanks for sharing dear :)
15 April 2009 at 17:28

Anonymous said…
That was a great story Shama,about the village !! Great yummy recipe,,
happy new year to you and family
15 April 2009 at 20:39

Sangeetha said…
Hey that's a nice introduction to the village. The liver gravy looks yummy too, will surely try it
15 April 2009 at 22:24

Popular posts from this blog

I am back again with this celebration event . Christmas and New Year is nearing and all will be eagerly waiting to have a great vacation.I invite you all to join the christmas and new year party in my blog too .


Photo :http://highdefinitionphotosandwallpapers.blogspot.com/2010/11/free-christmas-wallpaper.html . Thank you a cute one .

Rules for the Event :

1) Post your Christmas and New year celebrations happier moments with us . You can either share your party food , decorations in your home , neighbourhood etc . Something related to the celebration .

2) Please feel free to use the logo . Link it back to my event page .

3) Mail your entries to shamanagscrafts@gmail.com .

Rules to be followed :

1. Post any vegetarian /non-vegetarian recipe prepared with only Milk as a main ingredient between 1st Jan and  31th Jan 2013.
2. Link to my event page and Jagruti's event announcement page. Logo is mandatory .
3. Multiple recipes are welcomed .Archieved recipes are accepted only with their reposts with event links and logo.
4. Send your entries to shamanagscrafts@gmail.com with the subject line as Event name attached with the said details:
Name : Blog Name : Recipe Name :  Recipe URL :  Picture of your recipe :
4. Non-bloggers are welcome to send your recipes to my mail with the picture of the recipe .

Enjoy the event and have fun .
12 comments
Read more

1) Dry fry them one by one and grind them to a fine powder with sufficient salt.
2) Store them in an air tight container.

Linking it up with Nabintha's Home made Spices event.
22 comments
Read more

Easy2cook Recipes blog is created to share my recipes which I have learnt from my family and friends. Measurements of Spice and Salt used in recipes are according to our taste and flavour, you can change them according to your taste. Hope, you will enjoy preparing the recipes shared.